I love being in the Ascend Project. It started out a bit rough for me mostly due to my massive insecurity but things are so much better now. I look forward to getting up each morning and heading down to the Mozilla office where I get to spend the day with a room full of awesome people. I like them more and more each day. Today we had an issue, the details not necessary, but it was wonderful to see us come together as a group and do the right thing, then brainstorm about how to avoid such issues in the future.

Kronda was back from her conference and we were all very happy to see her! Probably not as much as Lukas though because she was sick and needed to lay low. We spent our morning catching up on things before the All Hands meeting began. I was caught up so I looked over the agenda and it said to prepare to set up Wordpress locally or prepare to build Firefox from source. I wanted to walk through the Wordpress stuff with Kronda and the class so I worked on the prerequisites for building Firefox from base. I first wanted to get Virtualenv working so I did that and then stepped through getting things set up to build Firefox. That went really quickly. The All Hands meeting began so we all focused on that and then had a brief, private meeting before lunch.

Lunch was delicious again! Katt got us yummy lentil shepherd’s pie again. I ate quickly and then rushed down to the post office so I could mail my poor, injured friend some coffee. The forecast calls for rain tomorrow and it was beautiful today so I took advantage of that.

Lukas went home and Kronda took over. She had us get started on a tutorial for installing Wordpress and it went really well! Until it didn’t. Adam and I got ours to a point where it should have been working but wasn’t. We tried this, and tried that. Kronda went from one of us to the next trying her best to help. At some point, someone noticed that the website we were using was different for some of us so it seems the author was changing things. Not very helpful! Kronda didn’t seem to get frustrated at all but she really wanted to figure out what was going on so I handed her my laptop so she could mess with a clean system and I took a bit of a break. She totally got in the zone and was digging away at the issue but didn’t quite figure it out before the day was done.

We all did our checkouts. Some people were really frustrated with all of the yak shaving but some of us were happy to have the experience since this is a common thing for a developer. Adam and Zeus got their systems working so Adam sent me copies of his config files but we couldn’t stay and sort things out. I will have to attack this problem in the morning.

I walked to the Max and must have just missed the Yellow line so I stood there for quite a long time waiting. Candida happened by because she had gotten slightly lost but had found her way again. We chatted for a bit before my train showed up and then my neighbor ended up being on the same train. She had a yak shaving day too! 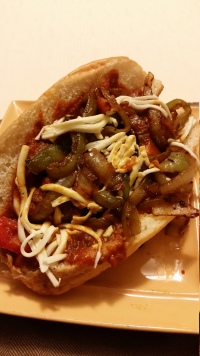 Wayne made yummy meatball subs for dinner and it was a quiet night with just the seven of us. I am feeling really tired for some reason and it’s not even close to bed time. I hope I’m not coming down with something.

Today I learned that setting up Wordpress locally is kind of a pain in the ass.