Today was a busy day in class. The moods were varied during check in but the majority of people were feeling ok. We worked on finishing up getting Wordpress installed locally and there were many different issues. It kept us busy for pretty much the whole day. People also cloned the Mozilla core repository so they could get ready to build Firefox.

I was moving along pretty well with my Wordpress install because Kronda took my computer home last night and used it to write an updated blog post that explained how to install Wordpress locally and how to work around certain issues that might come up. I did hit a wall though when trying to get Wordpress to talk to the MySQL database. It kept saying it was unable to connect. I searched the web for solutions and there were a couple of different things I tried. I first tried removing the password in the wp-config.php file because my database didn’t have a password but that didn’t fix it and being kind of new at problem solving of this sort I wanted to make just one change at a time so I changed it back to having a password and then changed the setting for hostname from “localhost” to 127.0.0.1. That didn’t work either so I tacked on the port number 3306 at the end and that also didn’t work. I searched and searched and tried changing localhost to Localhost as someone had suggested. None of this was working so I finally asked Kronda to look at it and grrrrr! It needed the IP address AND no password! Lesson learned here for sure. I mean I knew it didn’t have a password but I just didn’t follow through with the logic.

It works now though so I’m relieved. I was caught up on everything so I messed with Mozregression. It’s a nightly regression finder for Firefox so you can narrow down when a bug was introduced. It allows you to input the date of a build you think or know didn’t have a bug and then the date of a build that you think or know does have the bug and then it will download different versions, run them with new, clean, profiles and guide you through a bisection until you narrow it down. It’s super cool!

We broke for lunch and it was food cart day. I chose the Ethiopian cart but when I gave her my giftcard it kept getting declined. I know for sure I had enough money on it! She said to just take the food and pay her later. People are SO nice! Luckily Kay was nearby and wasn’t going to be eating. She let me use her giftcard which worked just fine of course. I came back and checked mine online and it showed it active with enough of a balance to have paid for my lunch so I can only assume the vendor had entered in the incorrect amount. I gave my card to Kay so it’s all worked out and lunch was pretty fantastic.

We ended our day with some still being stuck on the Wordpress task but everyone seemed pretty mentally done. Carmen was coming for dinner night so we walked to the bus stop and headed home. Andrew decided to start a fire in the wood stove since it was the first day of Fall. We had the front and back doors open so it was technically cool enough in the house. We all loved having it! 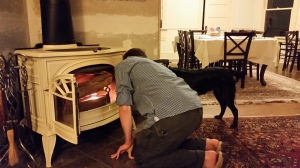 I jumped in the kitchen to help Wayne with dinner and Nate took Carmen to his room to show her his tree frog, Walter. They ended up talking for nearly an hour about all manner of things. It was a very quiet evening since Miri and Dale were at home with the new baby, Jason and Alice had a conference to attend, our older children didn’t come. It was just the five of us, Carmen, Spencer and John. Dinner was enchilada casserole and it was delicious. We had great conversation.

Today I learned that the Latin word for frog is rana.