Our instructors have been so busy teaching and helping us that they haven’t had much time for meeting with each other so they gave us the option of coming in later. Most of us wanted to come in early and get to work so they said we could but that they would not be available until they were done meeting at 10:00. I usually go downtown with Andrew on Thursday and Friday so I was going to be there anyhow. I showed up at my usual time and helped check out computers so anyone who came early could get to work. I finished up some commits and got everything pushed up to my Github repo and then added to my open pull request.

I decided to add my name to my index page for my blog posts since people might want to know who wrote them. I helped another student get started on some stuff they missed when they were absent the day before and then I chatted with another student until it was time to check in. Everyone seemed pretty ok considering it was the end of the week and we had really been ramping up our learning the last few days. Several took advantage of sleeping in and were really happy about that. Lukas showed us a great Mozilla bug search website and Planet Mozilla where blogs from the Mozilla community are aggregated. We all looked through them and tweeted about any we found particularly interesting.

We also did more catch up stuff for a bit and also updated Bash because of a newly discovered vulnerability. Kronda then talked to us about why it might be important for us to blog. She mentioned that some people make a living simply by blogging but that even if we aren’t being paid to do it, blogging can help with exposure. It’s also a place to show potential clients or employers what we know. I’m happy I will be able to look back and see how I progressed and I hope our blogs might help and encourage the upcoming Ascenders.

We took a break for lunch and today it was “food cart”/”get out of the office and find food”day. I went to Whole Foods and got a garbanzo salad and some fresh carrots for lunch and then headed back to the office to eat. Everyone ate and socialized for a while and then it was time to get back to work.

We spent the second half of the day installing VirtualBox and then building Firefox on a virtual machine. That went surprisingly well considering how most everything else we have done has had it’s bumps and hiccups. When everyone was caught up with that, Lukas wrote the next instructions on the whiteboard. We were to clone our Ascend repo to the virtual machine, apply the patch we made yesterday, run the modified version of Firefox, take a screen shot of the modification in action, and then push the image to our Github repo.

We didn’t get walked through any of this process so I had to figure out that the VM didn’t have Git. I had to install that and then try and remember the syntax for fetching a repository. Once I had the repo on the VM I had to search for how to apply a patch with Git (Adam helped me figure this out) and then build and run the patched version. It worked! Then I had to get a screenshot. I was trying to get a screenshot and it was just not working at all. Once again, Adam to the rescue! He told me to get an app called Skitch. I downloaded and opened it but couldn’t figure out exactly how to make it do what I wanted either. Grrr! Yup, I bothered Adam again and he quickly showed me how to use the timed screen snap feature to get just the screen shot I wanted. 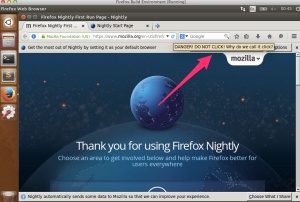 While I was busy working away on the VM tasks my pull request was merged. Just in time for Lukas to inform the class that an update was made to our blog template so we all needed to add an author tag and our name to the header of each blog post. Well this was a handy lesson for sure because I had to revert my index page to the way it was before my pull request was merged and then update each blog post. I had 13 blog posts to change but they all needed the same thing added to them in the same place so I figured there must be a way to do this in Vim. I searched a bit and found it was pretty darned simple. But then of course I didn’t do something I don’t really understand and couldn’t save all of the files and I couldn’t quit some of the files and grrrrr again! I wanted to get them edited, committed, pushed, and submit a pull request before I left so I just closed the stupid tab the files were open in and edited them one by one. When I am not rushed I will mess with this feature and figure out what I screwed up. It’s all done though!

I met Andrew at CA and we had a nice ride home. I told him all about my day and he gave me some handy Vim suggestions. It was BSD Pizza Night and this month Handsome Pizza was the place to meet. Dave showed up and then we walked over. We had our usual amazing pizza and the BSD nerds talked about whatever they talk about. I didn’t really care, I got myself a vegan coconut ice cream cone. Life is good.

Today I learned about Skitch. It’s free too!